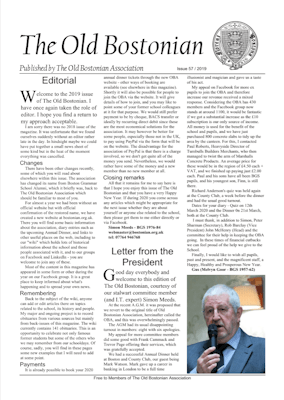 I am sometimes asked about school magazines. It sounds like a simple matter but it can quickly become complicated when you realise how many different magazines, newspapers and newsletters have been associated with Boston Grammar School over the years. I don’t claim to have an encyclopaedic knowledge but I can provide some starting points.

The longest-running publication was The Bostonian. An annual magazine which started in July 1920, it seems to have been fairly strait-laced in its early days. By the 1970s it had changed its tone, being edited by a group of 6th formers under the supervision of Rev John King, teacher of English and Religious Education. As well as the usual exam results, reports on sport and other extracurricular activities, and a section for the Old Bostonian Association, it had some pretty wild articles by pupils, making it in part something like a rag mag. For some time members of the Old Bostonian Association received a copy in return for their annual subscription and pupils of the school received a copy in return for payment of “voluntary subs” which went towards payment for non-core facilities at the school. The Bostonian continued well into the 1980s before being discontinued.

I don’t have a record of when The Old Bostonian started production. It continues to be the magazine of The Old Bostonian Association. Past editors include George Bagley, Reg Adcock, Pete Swift, Simon Meeds, Paul Mould and Dan Elkington. Currently Simon Meeds has returned to editing the magazine. It started off as a twice-yearly publication and has been annual since 2009. Its current aim is to provide a summary of news items referring to the school, and its current and former students and staff. From time-to-time it also includes general interest articles by former students or staff and publicises events organised by the OBA. To a large extent the current publication puts into print (and downloadable digital form) articles which have previously appeared on the Boston Grammar School Alumni group on Facebook.

The current official publication of Boston Grammar School is the Acta Grammatica. Some back issues are available on the school website.

Students of Boston Grammar School on the other hand are always busy producing the next issue of the Grammar Gazette, acknowledged by The Times as the longest-running student newspaper in the country having started publication in 1992. Members of its editorial team, including Adam Shergold and Harry Parkhill, have gone on to careers in journalism. Grammar Gazette has an account on Instagram.

The final entry in this tour of BGS publications is one I know little of. Its name was The Quintian and it was produced by fifth formers of the school in the 1940s.

The featured image is the cover of the 2019 issue of The Old Bostonian. This and a number of back issues are available to members of the Old Bostonian Association from the members area of this website.